So, if you follow me on Instagram, I’m sure you’ve seen that I’ve recently adopted a new baby. He’s a rabbit that I’ve named River and he is the cutest bun ever (he’s also the bun in the picture and WOW is he so photogenic right?). He’s the fluffiest, wiggliest lil gift I’ve ever been given and I love him.

I love setting him on the ground and watching his fluffy white tail bob up and down as he hops across the floor reveling in the bliss of his newfound freedom. I love playing with him and making sure he doesn’t chew up everything I own or wiggle into a spot that he can’t wiggle out of. I love sitting on the floor and having him hop up to me to get his lil ears tickled, cause man!!! does he love getting his ears tickled. But of everything I love to do with him, I love to snuggle him.

But the thing about this bun is that he doesn’t enjoy snuggling quite as much as I do, especially if he hasn’t had the time to run around and get his energy out before I capture him. And the other day, right after I scooped up the squirmy lil bud, it was like Jesus whispered to me, “Baby, that’s what I’m doing to you right now.”

Ya see, I’m in a phase of life where I feel like everything has been stripped. The summer of my dreams, one filled with kayaky, car-camping adventures has been postponed (at the very least) and is instead filled with tons of work. The prayers that I’ve prayed most fervently have yet to be answered… the ones where I beg for deep Nashville friendships or progress in making a career out of my creative passions or for my dad to become healed and healthy and whole. I beg for eyes to see the beauty in what I’ve been given, all the while asking Jesus to give me girl friends, a Bible study, renewed energy, anything.

The reality of my situation is that I’m being forced to rely on Jesus to sustain me. I’m being scooped up by Him, unable to run to the things that I tend to put before Him. And here I am, just like River the rabbit, squirming to get free… planning an escape as soon as I can get my gigantor feet planted under me.

This season of life reminds me so much of the second chapter of Hosea. Hosea was a prophet of the Lord, someone chosen to speak for Him to His people. And God wanted Hosea to firsthand know what it was like to be in love with an unfaithful bride, so He called Hosea to marry a prostitute named Gomer. Hosea married her and loved her with all he had, even buying her out of slavery again after she ran away from him and back to prostitution. In chapter 2, the Lord is speaking about His people, Israel, showing how unfaithful she had been, running away to other gods and other people and other things and showing His pursual of her.

“She said, ‘I will go after my lovers, who give me my food and my water…’ Therefore I will block her path with thornbushes; I will wall her in so that she cannot find her way. She will chase after her lovers but not catch them… Then she will say ‘I will go back to my husband as at first, for then I was better off than now.'” -Hosea 2:5-8

The goal of Jesus thwarting her way, taking away her lovers, was to bring her back to Him. It was to help her be faithful to Him, her true Provider. He was, in fact, the One who gave her her food and water… and without anything or anyone but Him to rely on, she would see it to be true. And the best part about this whole chapter?

The goal of bringing her back to Him wasn’t for Him to be able to reprimand her or punish her… He simply wanted to love her. He wanted to betroth her to Himself. He wanted to make her a bride, not a slave. His goal was merciful unity with her, not condemnation.

Friends, how much better would it be if I accepted this thwarting of my paths as an invitation into glorious oneness with Jesus instead of a separation from all the things that I long for (and sometimes keep me from Him)? What if, unlike my rabbit, instead of trying to break free from His grip, I laid my head on His chest and let Him hypothetically scratch my ears? What if I enjoyed every single moment of simply being with the One my soul longs for instead of yearning for what I know won’t give me the satisfaction I’m looking for?

So this week, friends, rest in knowing that the God who knows and loves and formed you is so for you that He will sometimes take away the things that are precious to you simply to be with you… and instead of running from it, join me in trying to press into the goodness that comes from being with the One who is most precious to us. Jesus is worth every ounce of snuggling that our lil fluffy bodies can handle.

And just because I love the lil babe so much, I’ve attached proof of his love done below for your enjoyment. 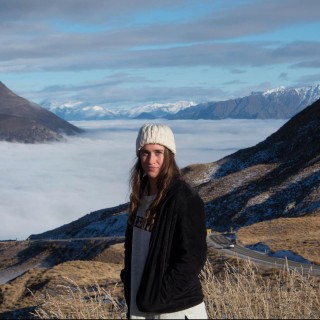